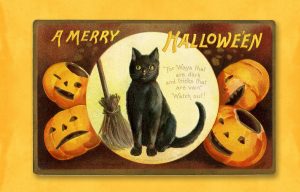 As Samhain (pronounced ‘sow’inn‘) or the ‘Festival of the Dead’ approaches, this very important date in the Pagan calendar is often superseded by the shenanigans habitually attendant on Halloween, celebrated on the night of October 31st.  Believed to be one of the original festivals behind the holiday we know as Halloween, this ‘Witch’s New Year’ is also associated with the Christian calendar, All Saints’ Day, also known as All Hallows’ Day, falling on November 1st, the preceding day known as All Hallows’ Eve – hence ‘Hallowe’en’.

While the run-up to the 31st, marked by the sale of pumpkins and fancy dress parties seems to begin earlier with every passing year, Samhain itself  is celebrated from sunset on October 31st to sunset on November 1st as the Celtic day began and ended at sunset, the date falling almost halfway between the autumn equinox and the winter solstice.

With regards to the lore and customs of Samhain (meaning ‘Summer’s end’) firmly rooted in the Gaelic tradition, this is possibly the biggest festival of the Witches’ year, a time to remember those who have passed on, celebrate the end of a hopefully fruitful Summer and prepare for the long, dark Winter months ahead.  The end of the cycle of birth and growth, the celebratory rituals surrounding Samhain include bonfires, dancing and feasting, and indeed some of Halloween’s most common traditions such as the carving of pumpkins and bobbing for apples stem from Samhain’s harvest festival roots.  Though pumpkins are very much an imported American tradition, as the Celts regarded the human head as the Seat of the Soul, the concept of the carved pumpkin with a candle inside it as the Light shining from the Soul could be construed as a modern tradition fitting with the ethos of Samhain. 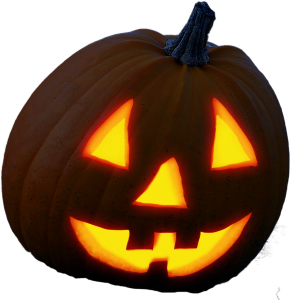 Concerning customs such as apple bobbing, we’re on firmer ground, however, as many of the apple games played at Samhain grew out of the belief in the Apple as a sacred and magical fruit.   (An apple, cut crosswise, reveals the five-pointed star, or pentacle at its core, a symbol of the Goddess.)  Symbolic of life and immortality, in Celtic tradition, apples were buried at Samhain as food for those souls who are waiting to be reborn, and as this is also considered a liminal time, when the veil between life and death grows thin, some celebrate Samhain with a ritual to guide the dead home, the Candle Ceremony of The Ancestors, opening a western-facing door or window and placing a candle in the opening.

So, whether you’re honouring your ancestors, or honouring your sugar craving by going trick-or-treating, whatever you do, have fun and enjoy as the nights lengthen and Winter begins.

As a postscript, though the origins of Halloween may be ancient, the celebration still marks a turning point in our modern calendar, and it’s just a sleigh ride toward Christmas from here on in, and the surprising Pagan origins of our modern festive cheer will certainly make for another Blog with the approach of this beloved Winter holiday.