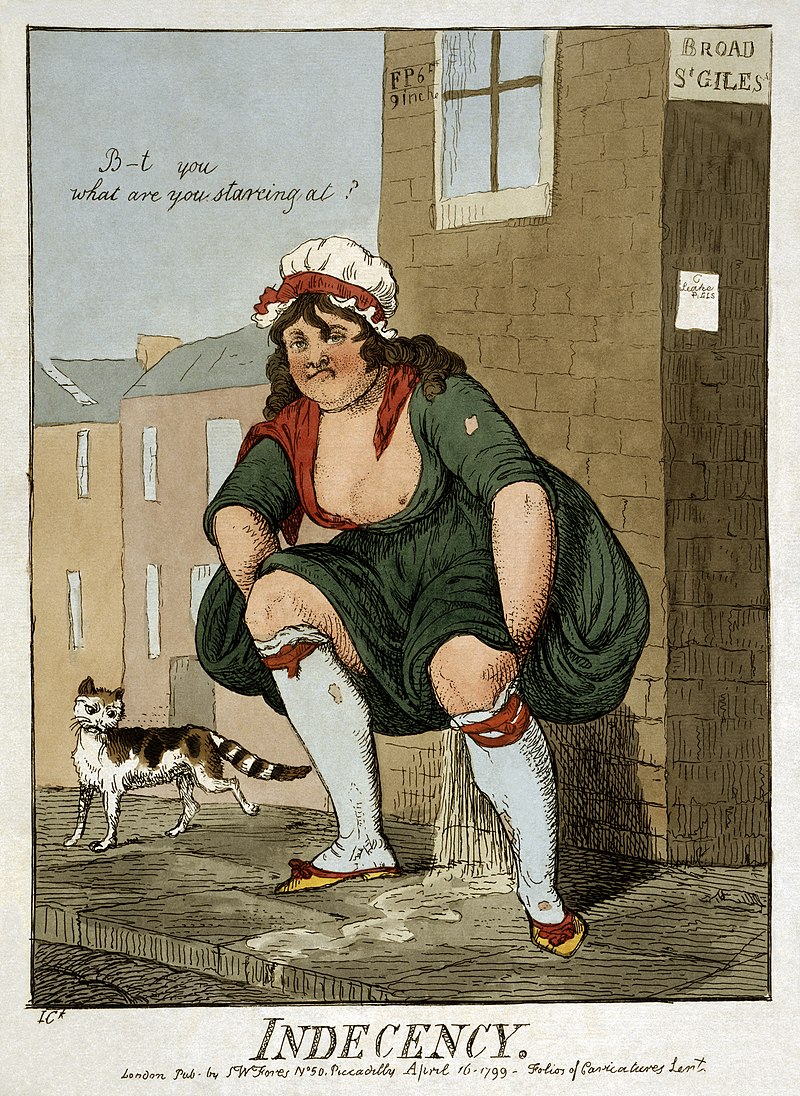 Any dictionary definition will tell you that a ‘bawd’ is a woman who is in charge of, or keeps a brothel, yet despite the unscrupulous associations with such a profession, in Georgian London the ruthless exploitation of the rich market for sex spawned some of the eighteenth century’s most salaciously successful sexual entrepreneurs, who as well as amassing a great deal of money also gained a measure of celebrity through their notoriety into the bargain.

While much has been written about the seamy underbelly of 18th century London, particularly with regard to prostitution, this was nevertheless a lucrative aspect of the city’s ingrained climate of organised crime; those convicted of whoring, especially those who operated from the streets, regularly picked the pockets of the men they picked up, and often operated in league with other pickpockets, acting as a distracting decoy. 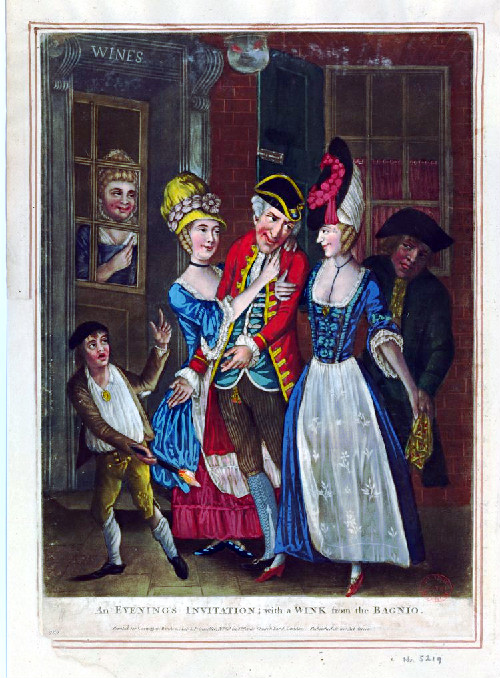 In most cases, theft rather than sex was the main object of the trade of prostitution.

While this profitable sideline to prostitution provided an additional livelihood, albeit criminal, for many, the real fortunes were those made by the notorious madams and procuresses who operated in ‘sin city’ during the reigns of the Hanoverians.  While they may have occupied a dubious place in society, even though some transacted business from beneath an obscuring veil of stylish respectability, these enterprising women capitalised on sexual demand, fulfilling the ‘Provision for Pleasure’ with a plentiful supply of prostitutes of both sexes.   Operating from the ‘disorderly houses’ proliferating in the vicinity of Covent Garden, or ‘the great square of Venus’ as it was otherwise known, this was the prime location for London’s sex trade, and astutely placed to take full advantage of the populous theatre scene which promised a steady supply of potential clients either emerging during the intermission or seeking further entertainment after the show was over.

Covent Garden or ‘the great square of Venus’ as it was otherwise known.

Though contemporary denunciations of moral laxity and societal perversion sounded loud, the literary and illustrative treatments of the likes of Moll King, the inspiration for Daniel Defoe’s Moll Flanders, and Hogarth’s portrayals of Betty Careless were certainly emblematic of the brothel-keepers profession, and appealed to a public hungry for depictions drawn from the racier side of life.  Then as now, sex sells, and there was also a profit to be made from the real-life stories of the likes of Jane  Douglas, ‘The Empress of the Bawds’, not to mention the sales of ‘sexual directories’ such as ‘The Wandering Whore’.  Published during the Restoration period, this was a precursor to the scandalous and eminently successful ‘Harris’s List of Covent Garden Ladies’ , listing the sexual attributes and services offered by numerous ‘light-skirts’ and the streets where prostitutes might be found, as well as the locations of the Garden’s prime brothels from which many practiced ‘the oldest profession’. 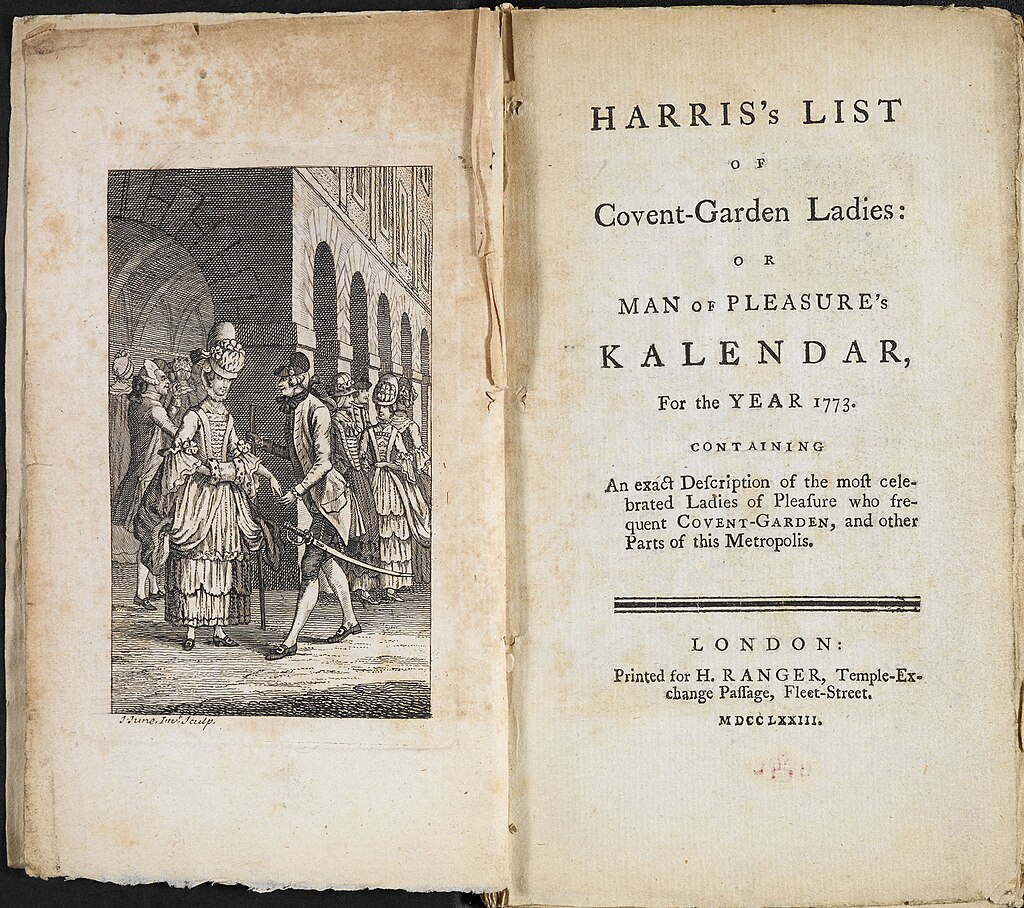 Of the services on offer from the ‘Ladies’ featured in Harris’s List, naturally you got what you paid for, and sometimes an unwelcome extra in the form of a venereal disease; this was, after all, an age ravaged by syphilis.  For the less discerning gent  a ‘ threepenny upright’, that is to say, an encounter out in the open with a lowly streetwalker, might suffice, while for clients seeking a little more discretion a visit to a ‘bawdy house’ or a ‘bagnio’ (a bathhouse which  doubled as brothel) would fit the bill.  Of course, depending on the kind of ‘house’ kept, these establishments ranged from the functional to the opulent, reflecting the ‘amusements’ on offer therein.  At the King’s Coffee House in Covent Garden, managed by the shrewd Moll King, sexual services were offered alongside the hot beverages, both served from the time the taverns shut until dawn, while the higher-end establishments, run by the likes of Elizabeth Dennison, were well known for “supplying the best ‘pieces’ in the Garden”.  Further up the scale, Charlotte Hayes considered one of the most desirable ‘women of the town’ was the owner of some of the city’s most luxurious brothels in and around King’s Place in St James’s.  Yet whether they be ‘Haymarket ware’, the term for a low-class prostitute, or a demanding courtesan, the goal was a common one – they were in it to make money.  And in this respect, much has been made of the economic contribution that the extent of prostitution had on the City’s prosperity, not only shaping eighteenth-century London but mooted as the financial bedrock of the City’s future development.

With estimates of as many as one in five young women engaged in prostitution at the time, this may well be plausible.  Certainly, this was an exploitative age.  For the thousands of girls who flocked to London each year seeking their fortunes, conversely, there were those lying in wait, keen to appropriate their naive willingness, as depicted in the opening scene of Hogarth’s The Harlot’s Progress.

In the first of Hogarth’s series of engravings, The Harlot’s Progress, the protagonist, Moll Hackabout, has arrived in London’s Cheapside and is being inspected by the pox-ridden Elizabeth Needham, a notorious procuress and brothel-keeper, who wants to secure Moll for prostitution – a fresh face and the promise of virginity meant that a higher price could be demanded from an eager client.

Eagerly anticipating the arrival of the rural coaches, these ‘bawds’, often women who had grown too old to make their own living from prostitution, would observe and select from the regular influx of country girls the most likely looking ‘raw materials’ for their trade.  And the ploy was a simple one: offering seemingly respectable work, once a false debt for lodgings and food had been run up, threats and violence were employed to ensnare the gullible innocents.  Seduced into a life of vice, which invariably turned out to be harsh, and short, their bodies, like those of the desperate homeless girls plucked from the streets of the city itself, were repeatedly sold for profit, callously exploited in feeding the appetite for paid for sex, which of course lined the mercenary Madam’s pocket…

In later ‘Provision for Pleasure‘ posts, I’ll be focusing on those ‘sexual entrepreneurs’ who managed to turn the infamy of brothel-keeping into a major industry, as well as delving into contraception, STD’s, fetishes, ‘Posture Girls’ and Molly Houses and some of the other salacious aspects of the Georgian sex industry.